Who doesnt love Murukku? Do you know how the famous Manapaarai Murukku came on the food map of South India? Many many years ago a small town called Manaparai was famous for its cows and milk (remember the song manaparai maadu katti?). At a time when trains halted in the station, an Iyer used to make and sell murukkus. Apparently no passenger passing through the station would return without a packet and that’s how the murukku became famous. The murukku was so popular that trains used to arrive ahead of schedule for an extended break at Manapparai station.That is technically the birth of the manaparai murukku. There were many people who worked under the Iyer to help make murukkus. One such person is Doraiswamy who lives in a very humble home and readily shares his wealth of knowledge on the intricacies of making these spiral rounds of heaven. He’s been making for over 60 years and was in action even few years ago until his son ‘murukku manohar’ willingly took over the baton . 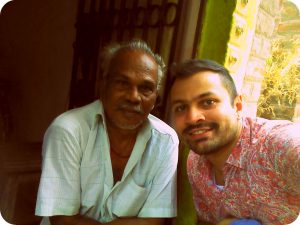 Murukku Doraiswamy recognized as a doyen in the business of making murukkus. — in Manaparai, Tamil Nadu, India. 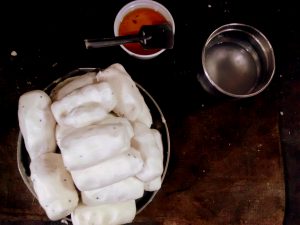 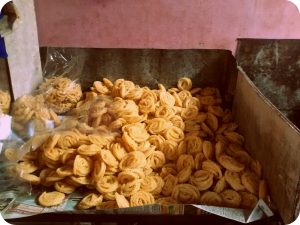 The Manaparai murukku ready to be packed and sent! — in Manaparai, Tamil Nadu, India. 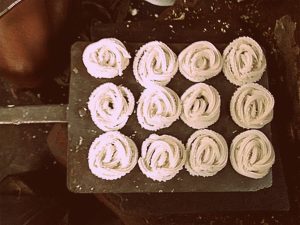 How cute does that look? Murukkus waiting to be deep fried in groundnut oil — in Manaparai, Tamil Nadu, India. 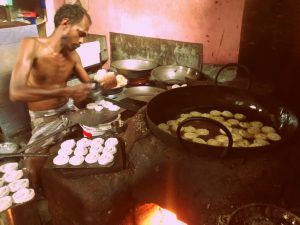 One of the employees making these fried wonders. I swear that kitchen was hot as a furnace! — in Manaparai, Tamil Nadu, India.

Doraiswamy, a spirited man is a curious on-looker as we start shooting. He’s making sure his son gives us the right information. They churn out a whopping 6000-8000 murukkus/ day on an average and this is completely family run. They do not retail under their own brand, but make it for other retailers. Hand pounded rice flour is mixed with water, salt, sesame seeds, jeera, omam and made into a dough. They are then put in through a manual extruder and fried in groundnut oil.

Watch this clip as I get talking to Murukku Manohar!